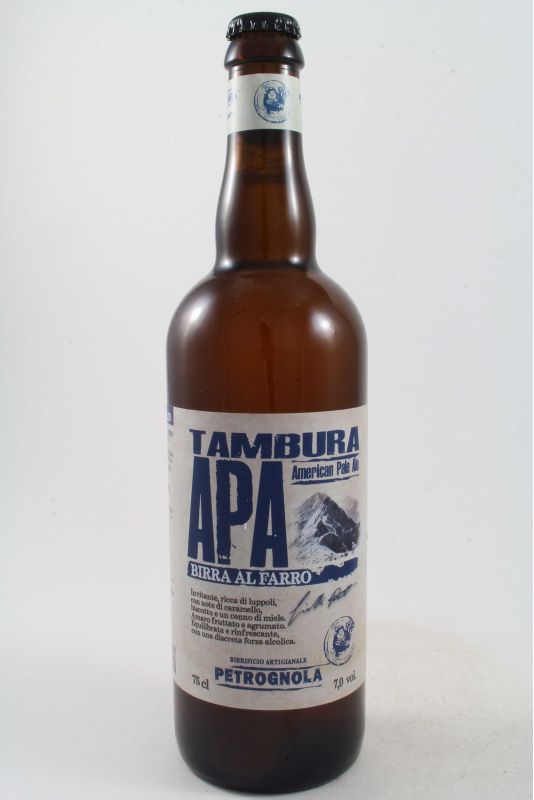 Everything started in 2002 in a tiny village named Petrognola, a town just a few minutes from Piazza al Serchio, when Roberto Giannarelli decided to turn a passion into a job that he still carries - production of beer. Initially, the beer was brewed at home using minimal tools needed, a thermometer, a ladle and pot in which the mother of Roberto was once made the excellent fireplace soup. The consumption of beer is still restricted to lucky friends, who immediately appreciate the taste of original recipes using farro. This enthusiasm pushed Roberto to purchase in 2005 the first "small" plant of 100 litres, enclosing the factory in a 4x4 room of the house and the fermentation room into an even smaller 2x2 m. room. The first requests for product as well as pressing bureaucratic reasons lead to taking the first step toward a brewery. Roberto decided to invest and finally crown his dream shifting production to the historic former barn renovated ad hoc to accommodate new plants and definitely give rise to La Petrognola Brewery: a room with cooking facility of Austrian 500-liter and two 1,500 litre fermenters with a production capacity of 1000 litres per week, bottling manual closely and a small heated room for the second fermentation in the bottle ensure an annual production of 440 hl. In 2006, the amber farro beer is awarded the l'UnionBirrai prize as "Best Craft Beer of the Year" in the category beers with other cereals. The awards will be repeated again in subsequent years for both amber farro beer as well as for the black farro. In 2008, there was the prestigious exposition of the Salone del Gusto in Turin, Petrognola with beer to accompany Garfagnana food specialities . Increased sales and production together with the spaces that were no longer sufficient: in 2010, we proceeded to purchase another 2 fermenters and transfer the plant to a structure of 250 square meters which was equipped with a bottling plant, with a labelling and a ripening room at a constant temperature that will allow the beers to realize a true quantum leap. In 2011 the Petrognola line of beers is extended, including a line of 5 beers made ??from farro, 5 beers of malt barley and also its particular Garfagnana "Marron" chestnut beer. The continuous succession of awards and honours and the construction of new plants and bottling methods, make the Petrognola Brewery a perfect blend of craftsmanship and productivity.

THE NEW ESTABLISHMENT AND NEW PLANT

In 2011 Petrognola reaches the milestone of 900 hl that inevitably marks a new hub for the development of the brewery. Between 2012 and 2013, the transfer takes place to the new site a few meters away from the previous one, but with very different spaces and possibilities for development: 900 sq. m. of facilities with 2,000 sq. m. of outdoor space, a workshop of 300 sq. m., a cell maturation of 180 sq. m. and a space dedicated to inventory and office space of 420 sq. m.

The laboratory machines include a new 2000 litre brewing room of Eco Brew Tech, side by side with two 5000 litre tanks, one for hot and the other cold water, which allow you to proceed even a double cooked without interruptions or breaks. The 6 new 2000 litre fermenters allow a production capacity of 6000 litres per week, which can translate into 3000 hl per year. However, the most interesting part of all is, the bottling line. It is made up of the existing block and with the addition of two new machines: a blower and a labelling machine which is much more dynamic and efficient than the previous one. With this line we can bottle and label in the same time 4000 litres of beer per day, with a considerable saving of time and energy.

Passion for their work and love of their land ... "These beers were born from the love for the Garfagnana, an area of natural and scenic beauty, and above all for its products. One of the most known and appreciated is farro, recognized for its quality by the European Union which has branded it GPI (Protected Geographical Indication). I live in this wonderful land and poetic, cradle of farro, and thought I'd use this cereal to produce my beers. All this is due to the passion and love that we sincerely hope to convey with these beers.

THE "BUFFARDELLA". FROM THE ORIGINS TO BECOMING THE SYMBOL OF PETROGNOLA

Although in some cases it is unknown what it exactly is, the Buffardello is generally described as small being wearing red clothes and pointy shoes. In some cases it is described as a child or at least as a male without a beard, in others as an old man with a beard. His hands were pierced by San Giovanni to keep him from choking people at night. Sometimes he may be seen sitting on a pile of hay or on a tree.
It is generally believed that the Buffardello is invisible, but there are testimonies of those who saw him in person: according to them the strange being lives in stables or trees, sometimes he is seen entering through a window, some other times walking, hopping and kicking. In the villages, near the houses his typical sarcastic laughter is often heard. In Gallicano it is said that he had once occupied a house and spent time opening and closing the windows laughing like crazy.
In the hamlet of Petrognola instead, they tell of a Buffardella who loves to make jokes and dressing up changing clothes and hair colour. We imagined her living in an old house lost in the woods of Garfagnana, where no one can find her ... and that's where she enjoys brewing beer according to ancient and original recipes with Farro.
Some say that her sisters help her at work; there are those who believe instead that these apparitions are due to disguises or play of shadows.
Everything seemed to be just a product of imagination when one fine day a brewer named Roberto Giannarelli, a lover of Garfagnana, began producing a series of craft Farro beers .... I wonder if the Buffarfdella has something to do with it!

THE FARRO FROM GARFAGNANA

Farro is the ancestor of all wheats known today, including soft and durum wheat, it is documented that its cultivation dates back to 7000 BC in Syria and Mesopotamia, where it was used for the preparation of porridge and buns. Farro has been the staple food of the Assyrians, Egyptians and all the ancient peoples of the Middle East and North Africa: the Romans used to prepare puls with farro flour, a soft polenta which fed the soldiers and the populace. With the emergence of wheat, Farro suffered from a "moment of crisis", but not in Garfagnana where it has always been cultivated and is still ground in ancient stone mills. The Garfagnana Farro that in 1996 received recognition by the European Union of Protected Geographical Indication (PGI) must be grown on suitable soils, poor in nutrients, in a range of altitudes between 300 and 1000 m above sea level. The seeds are sown in the autumn, in previously prepared soil, using a substance named Triticum dicoccum. The production of Garfagnana Farro, as was customary in the area, has to be done without the use of chemical fertilizers, pesticides and herbicides: given the high hardiness of the plant, Farro cultivated with the traditional technique is in fact an organic product. The Farro harvest occurs in summer, with normal grain combine harvesters. The geographical link with the Garfagnana Farro form an inseparable pair and presents special characteristics such as to make it easily distinguishable with respect to Farro grown in other areas. The Garfagnana Farro has been rediscovered today for its excellent dietary qualities and for its fibres that are beneficial for the digestive system. The Petrognola brewery, use this valuable Farro in order to produce a completely handmade beer.